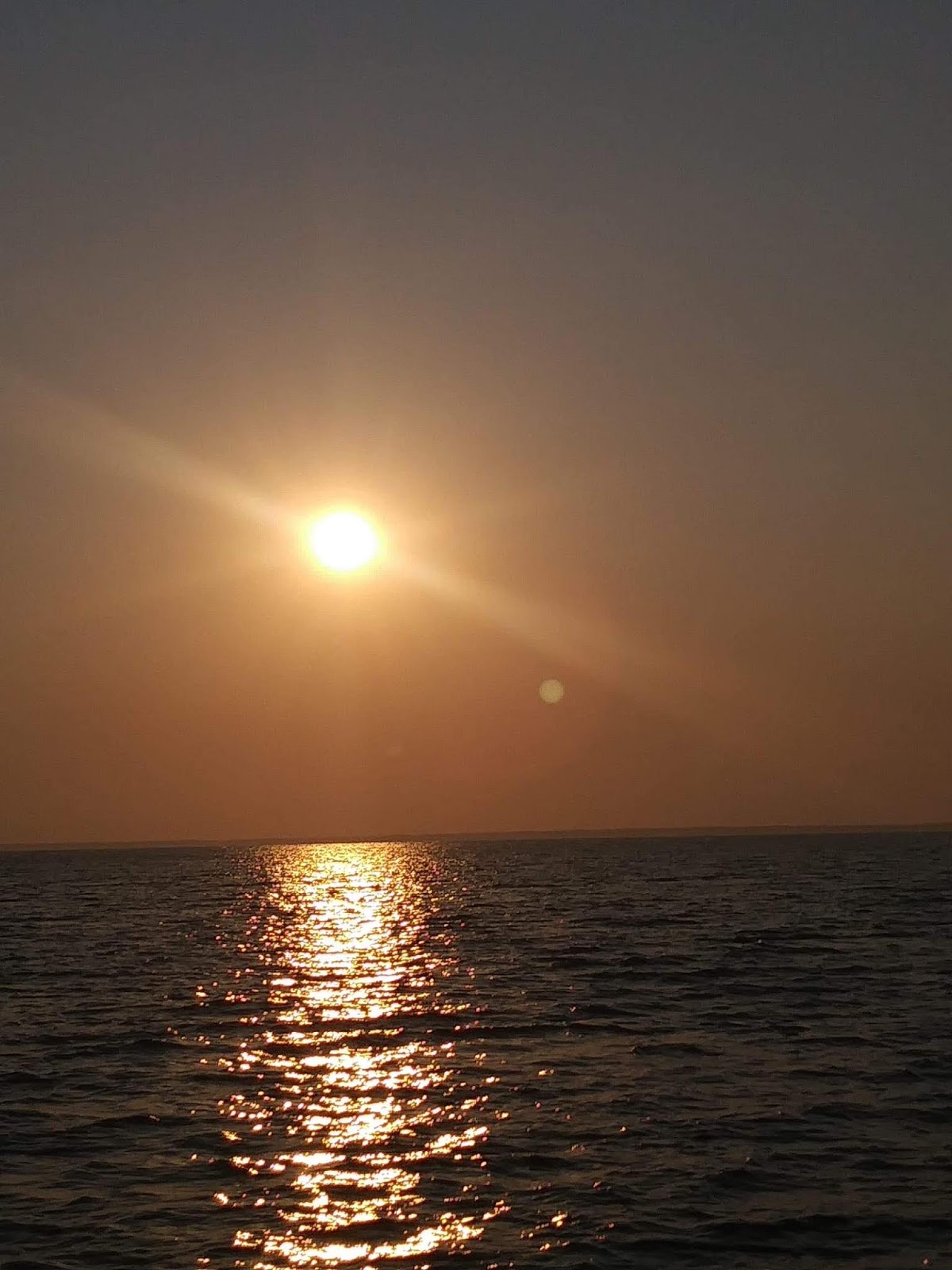 The South Carolina Outdoor Press Association (SCOPe) and members of the Georgia Outdoor Writers (GOA) had converged on the Santee Cooper lakes, as they held their annual fall conference at Black's Camp. As part of the group of  writers and photographers that were on the lake that particular morning. My wife, Melissa and I, along with Georgia outdoor writer, Polly Dean, were matched with an experienced guide, a man whose business is to know these waters and the popular game fish that thrive in great numbers there. Charles watched his graph, plotting our next move, explaining to us what the blips, blobs and arcs represented. After locating and following what I presumed was an old creek channel, Charles pointed out to us the bigger red and purple arcs-- stripers. 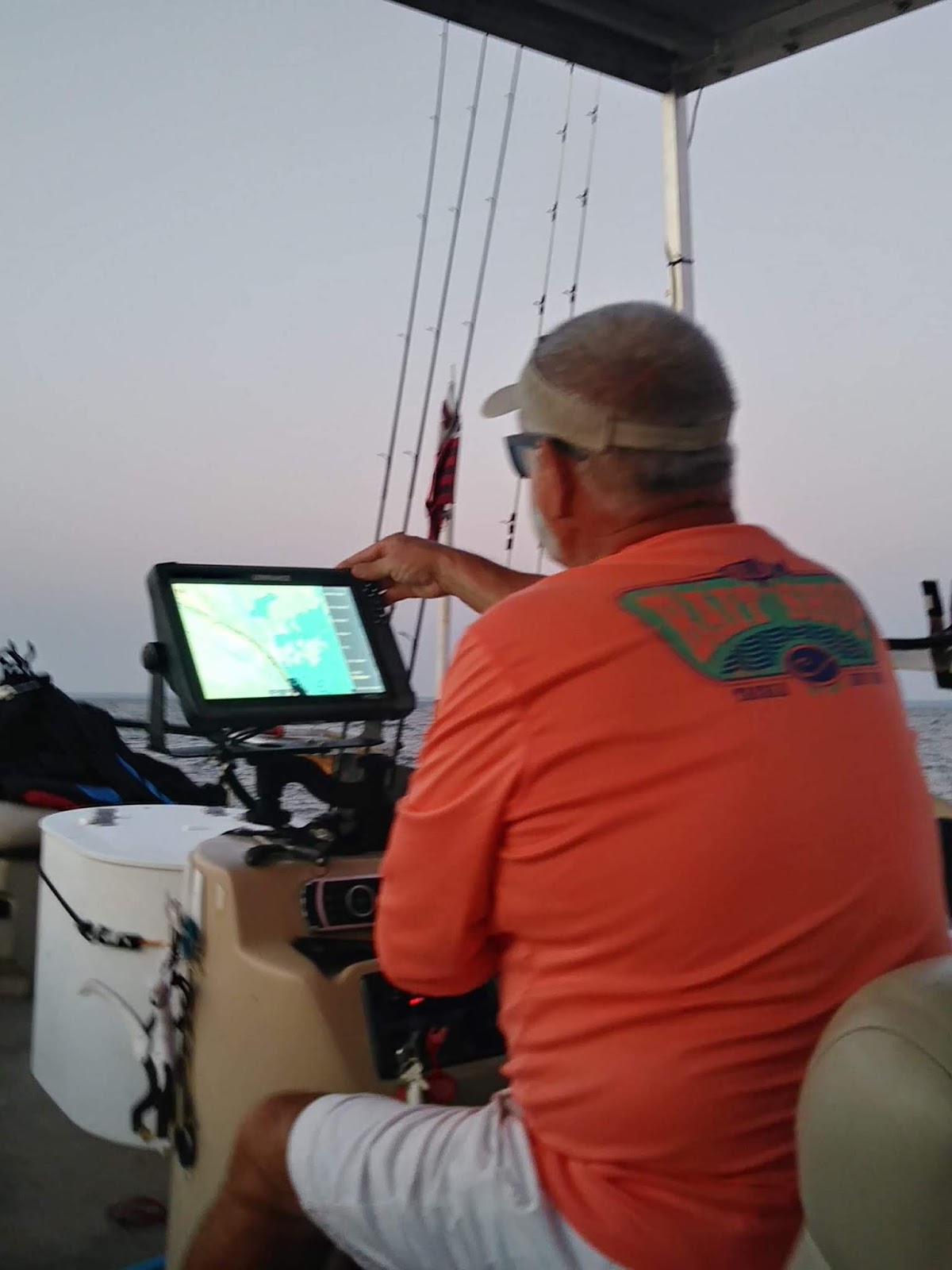 Our guide hurried to the front of the boat and pulled out two drift socks and put them out front to hold our position over the school of fish. He made quick work of baiting hooks with a blue-back herring. Just as quick as Charles sat the first rod in its holder, the rod tip bowed toward the water's rippling surface, and he grabbed the handle to keep it from getting jerked into the water. "What took so long?" he shouted.
The rest of us, standing there with mouths agape, couldn't make up our minds which one of us  should take the rod from the guide's hands. The two ladies quickly nominated me, and I brought the first striper of the day to the boat, and Charles quickly netted it for me. I was fired up, because it had been a few years since my last striper, and at last, I had the opportunity to catch another one. Melissa snapped a quick photo as he placed the fish on the ruler to measure its length. An inch shy of being a keeper, we quickly released the fish to prevent any further stress. 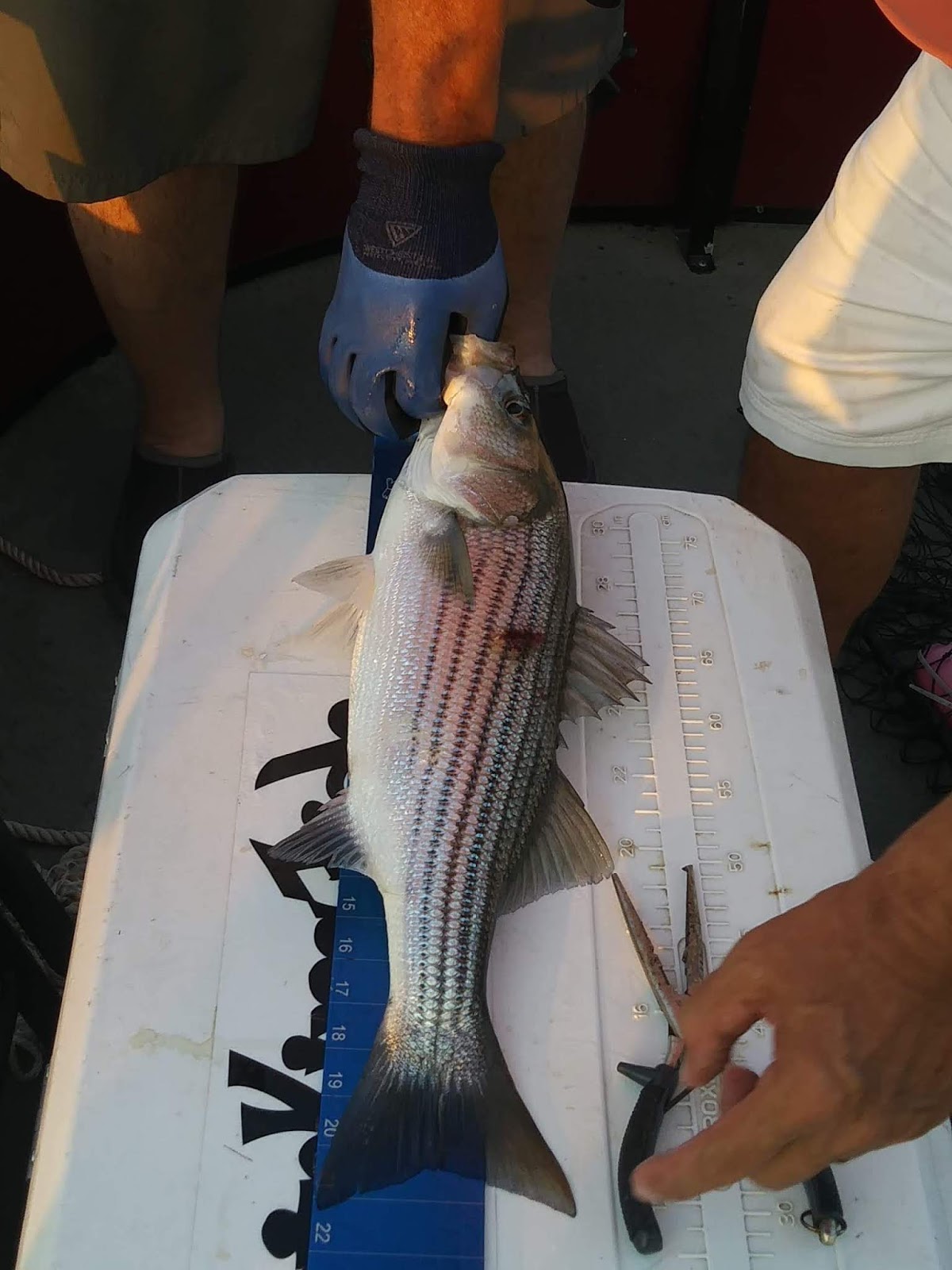 This was Melissa's first experience with a guide, and she watched with fascination as Charles worked his way around to the other rods, stripping off line, measuring the depth in which the baits must be for the best chance of another take. In minutes, another fish was on, this time, it was Melissa's turn.
As the rod bounced wildly in its holder, she sprang from her seat and took the rod, fighting against the weight of the fish to free the rod so she could start cranking. The striper made a run under the boat, bending Melissa's rod double toward the pontoon. Charles gave her instruction as I stood there watching with pride. It was clear, she was having the time of her life. This was not just any striper, it was, in fact, her first striper. 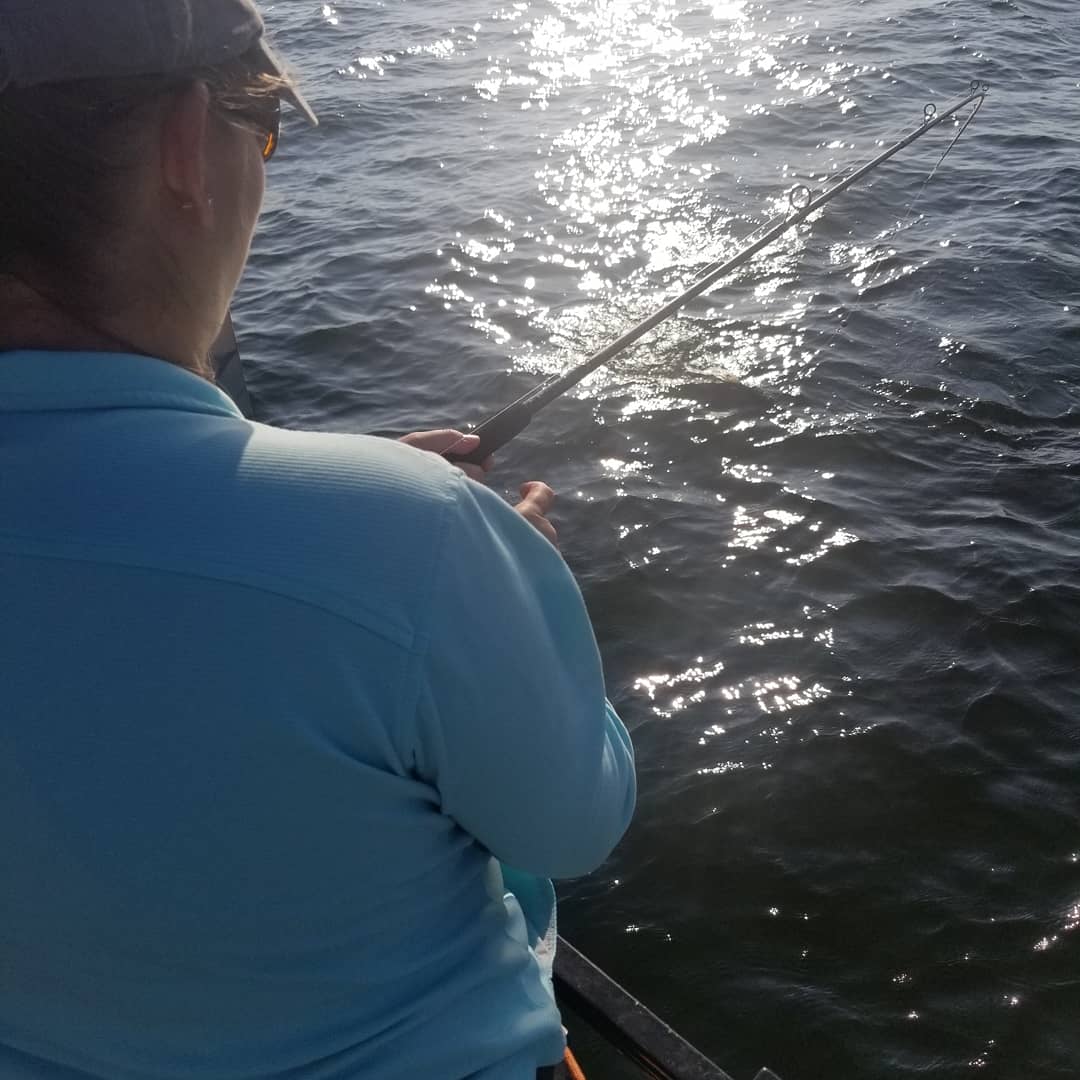 Melissa pumped the rod and cranked hard on the reel one last time, bringing the silvery torpedo to the fractured surface, her arms shaking. Captain Charles King netted the fish, and gave my wife a warm pat on the shoulder, congratulating her on her catch. He handed her the gripper, and she lifted the fish to show off her catch. Quickly, I took several photos to document the moment. Polly shared in Melissa's delight over her living trophy before us. The fish measured 22 inches, just shy of the slot limit mark, but that didn't matter. Melissa got exactly what she'd hoped for. No matter if the fishing slowed the rest of the day, she was content just to have experienced that moment. 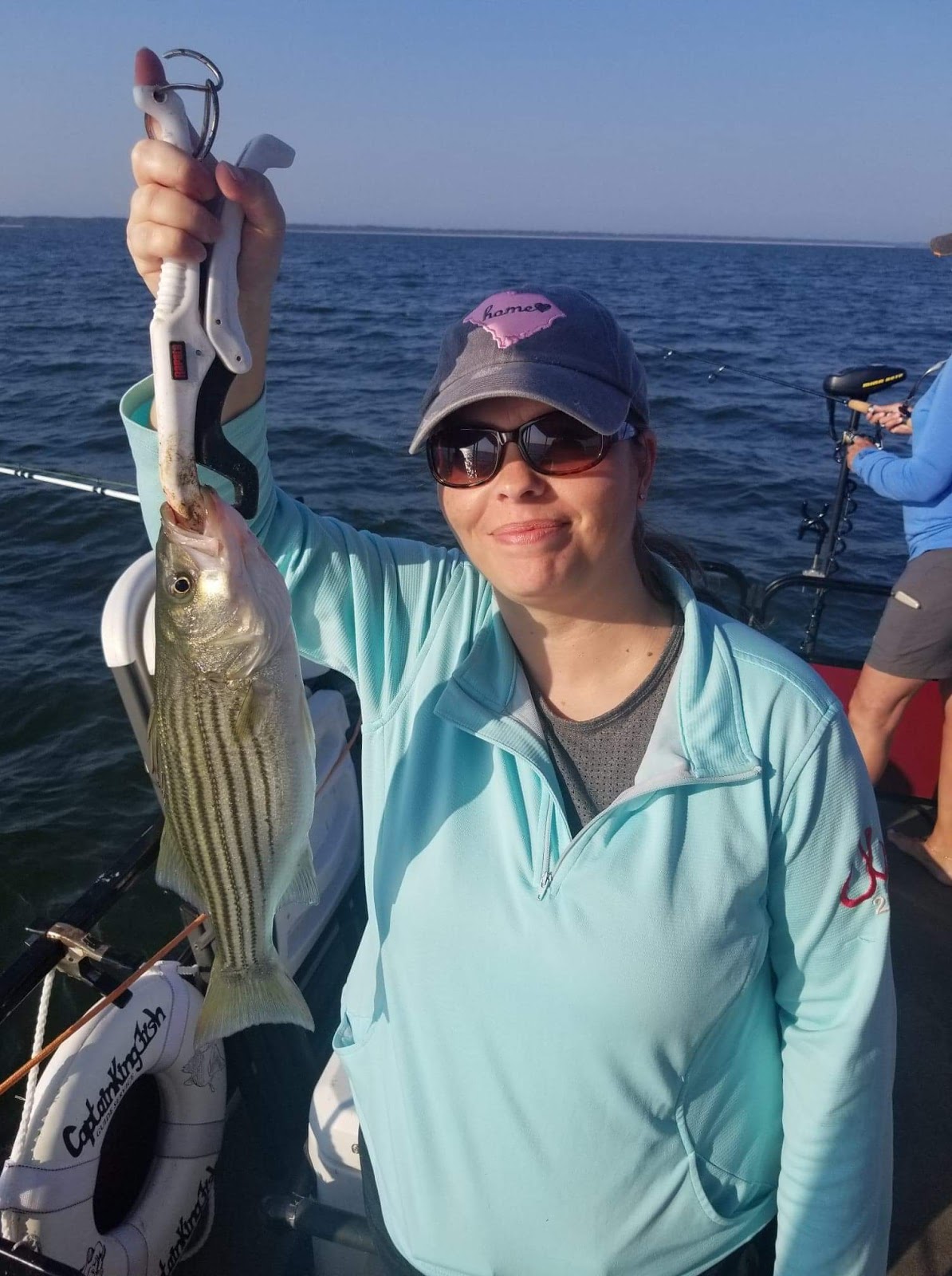 It was a day of many firsts for her: First time on Lake Moultrie, first time fishing with a guide, and first striped bass. In fact, that trip geared her up for the next time in Santee Cooper Country, and we hope that soon we will return to Black's Camp on Lake Moultrie, and climb aboard Captain Charles King's boat for another great day of fishing. 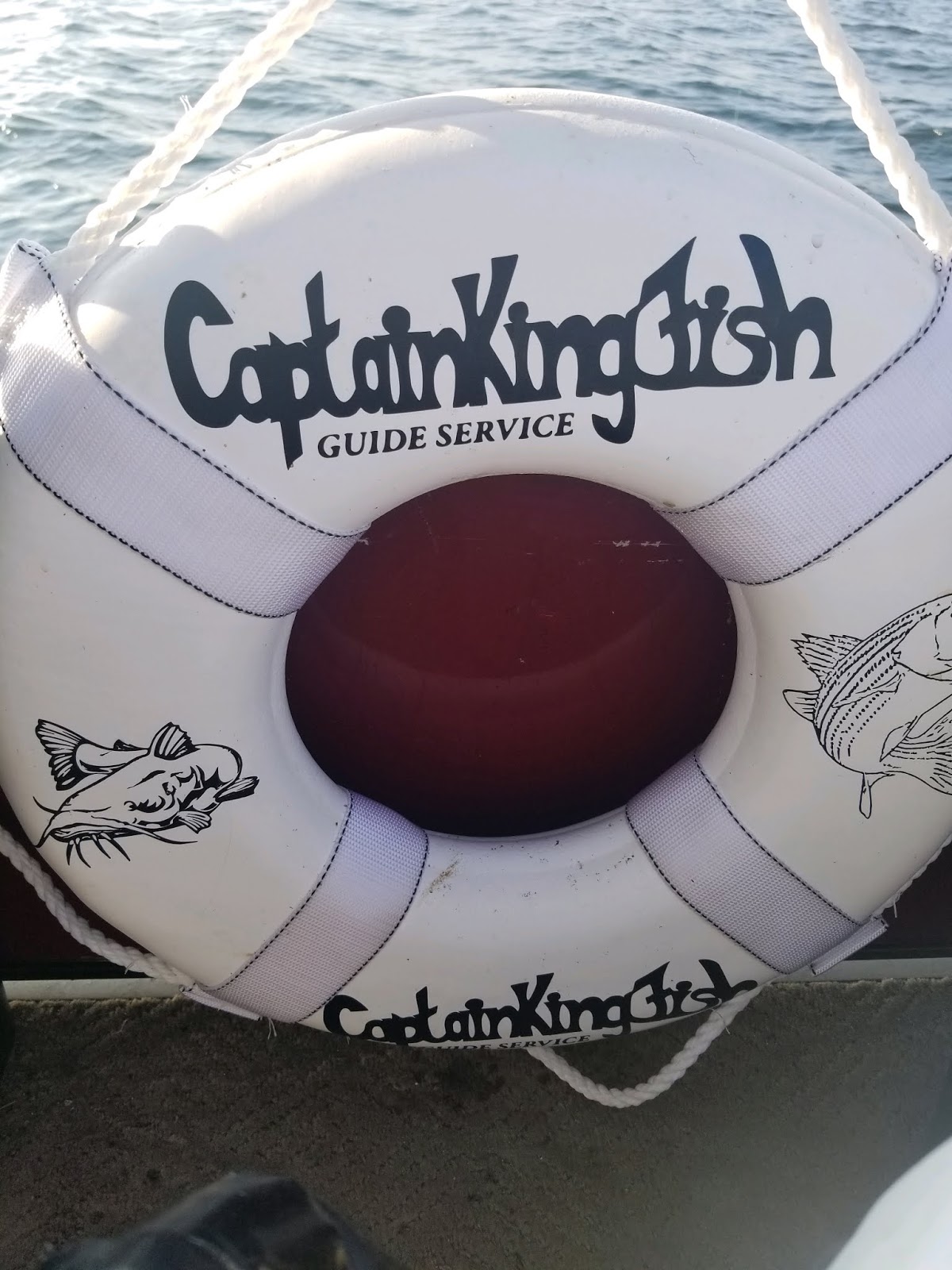 Where to go:
Black's Camp
1370 Black's Camp Rd.
Cross, S.C. 29436
Contact Kevin Davis at 843-753-2231
or email him: fisherman1370@gmail.com
Black's Camp offers quality lodging, restaurant, store and tackle shop, and landing with gas docks and fish cleaning services. Contact them today to plan your next trip to the Santee Cooper Lakes. They can accommodate large or small groups, and can make arrangements for several hunting and fishing guide services. Visit their website at: http://www.blackscamp.com
Clarendon Club
1219 Dingle Pond Rd.
Summerton, S.C. 29148
803-460-9379 or
clarendon.club@outlook.com
Our guide for this trip:
Charles King at CaptainKingFish Guide Service
Contact Charles at: 843-296-1083 or
captainkingfishsc@gmail.com. Charles operates out of Black's Camp full time and is US Coast Guard Certified. He fishes for both stripers and catfish, and also lake tours. Book your trip today, and expect a great day of fishing with a knowledgeable and friendly guide.
Special Thanks:
A special thanks to Mary Shriner and Santee Cooper Country for making this event possible.
We appreciate all your hard work to make this a success.
Thanks to Kevin Davis and his entire staff at Black's Camp for a wonderful experience at the fall 2019 SCOPe conference. Thanks for your hard work and hospitality.
Thanks to Charles King for a most memorable fishing trip.
Thanks to Trey and Whitney Phillip's and the Clarendon Club for your hospitality during this trip.
And a special thanks to the folks at Berkeley County and Clarendon County Chamber of Commerce.