In the stillness of early morning, the bowman steps into the woods. It is still quite dark, so he eases along with what little moonlight is left shining through the open hardwoods. The morning is cold, and deathly silent. Rainfall from the day before has dampened the forest floor, which made for quiet going, as long as he doesn't make a misstep and break a dead branch, or crumble a rotting log under foot.

There is no need to hurry, just take a few steps, then wait a few minutes. Watching the dimly lit woods, listening for any sound that would mean something stirring in the dark brush beyond his sight.

As the first hint of daybreak outlined the ridge above him, the bowman hears the slight shuffling on the far side of the spring- fed branch to his left. He scans the trees, trying to get his eyes somewhat adjusted, looking for any horizontal line that would indicate the back of a whitetail deer, standing motionless in the thicket.

The bowman stands like a statue for what seems like an hour, and as the light floods through the forest floor, it occurs to him that he's seeing shadows, or a fallen tree, not a deer, or any other living thing.

As he takes a step in the other direction, chaos erupts from the thick timber beyond the branch, and the bowman watches a large buck crashing through the tangle of vines and thick saplings, up the hillside toward the ridge, white tail raised like a flag. The buck blows and grunts as he climbed the steep slope.
He watched the buck flee with a cheerful heart, as it did his soul good to witness the speed and agility of the fine animal.

All was quiet again, all except the purling of the branch, the songbirds' waking voices, and the fast beating of the bowman's heart. 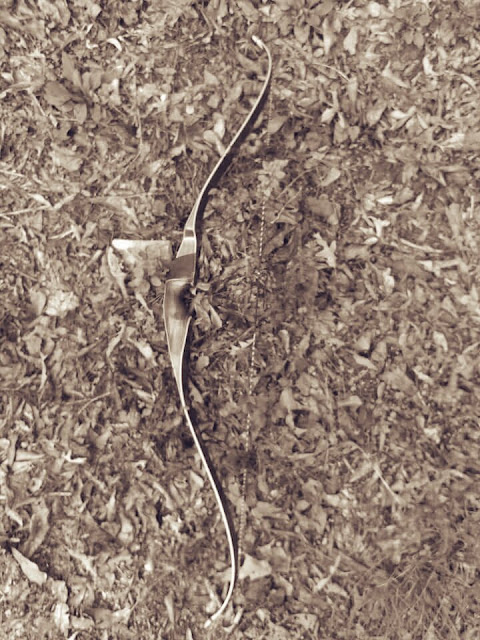