That morning, I paddled the cove, searching around fallen timber and boat docks for bass. The first one I hung into pulled my kayak around like a bathtub toy, even though he was no more than two pounds. I took a good look at the fish, then flipped him back into the tangled mass of brush that I'd pulled him out of. When I paddled back out away from the bank, I saw a man in a red kayak, working the shoreline toward me, although his only fishing rod was upright in the rod holder, and his hands were prodding the rocks, as if he was searching for something. I just watched him, wondering what he was looking for, and then when he pulled up a wad of mono with a Carolina rig attached to it, I knew he was a treasure hunter.

He looked to be around 70-- slender and tall with a white goatee and ponytail, earrings and tattoos, a stubby pipe puffing smoke as he paddled on around the bend to find another jewel.

When he looked up, I threw up my hand. He took the pipe from his teeth and said, "Morning, captain," and he paddled out toward me.
As he got closer, I could hear the faint sound of John Fogerty's "Have You Ever Seen the Rain?" coming from inside his vessel. I wasn't real sure what he had in mind, but I was pretty much stuck when he pulled his boat up to mine and reached over and pulled our two kayaks together.

"Everything going your way this morning?" I asked.

"Ah yea, you know," he said, "just another beautiful day." He just sat there with his arm on the side of my boat, and we both looked out across the lake, taking it all in, I figured.

"You live around here?" I asked. I couldn't think of anything else at the moment.

"Yea, just down the road," he said, "I'm here every Saturday, just about." He put his pipe back in his teeth, "Smoke bother you?"

We talked about random things like the weather, the kayaks, fishing. We introduced ourselves, and we awkwardly shook hands. He showed me his finds from the morning: a Daredeville spoon, a Rat-L-Trap, and a chain fish stringer. I told him about the fish that I had caught, adding both weight and length to it, like all good fishermen do sometimes.

As I listened to the man with the white hair and kind eyes tell yarns, I felt at ease. He didn't know me from Adam, but he acted as if we'd been friends for years.
Soon, we talked about our family life, and even touched on religion a bit. I knew that this was a chance meeting, as if we were put there that morning for a reason.

We said our goodbyes, and he shoved off. As I watched him paddle away, I thought about how I'd like to be that kind of man one day-- a simple man that will take time to get to know a stranger, and share this thing called life with them. I hope to run into him again. 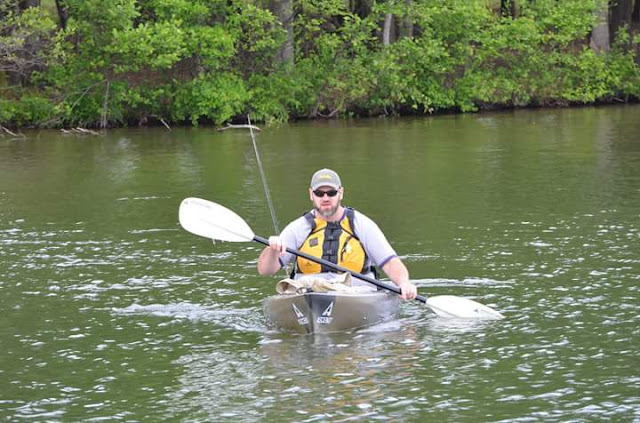