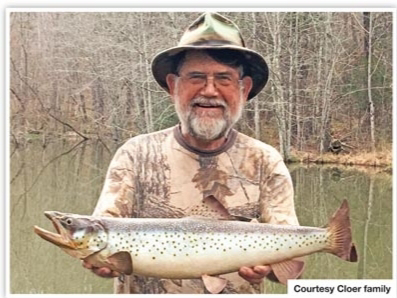 In my search for information on the history and tradition of fly fishing for trout in the mountains of South Carolina, I was extremely fortunate to have made the acquaintance of a true all-around outdoorsman and native son of the Appalachians, Dr. Thomas Cloer.

Our correspondence so far has been by telephone only, but I hope that once this current health crisis dies down, we can get together in person.

When I first contacted Mr. Cloer, I didn't know what to expect. Why would he be interested in anything I had to say? But I was pleasantly surprised when he returned my call. Within the first moments of our conversation, I felt as if I had known him forever. Maybe it was the kinship felt between two fly fishermen, or perhaps it was his kind voice, warm and familiar, a voice steeped in the tradition and language of the Southern Appalachians.

"Joshua, I would be more than happy to talk to you about fly fishing."

Dr. Thomas Cloer is Professor Emeritus of Furman University, and a resident of Pickens County. He was born into a nomadic sawmill family in Cherokee County, North Carolina, at Hanging Dog. Cloer's father was a foreman with the company, and his family moved around a lot, following the sawmill from Shooting Creek in Western North Carolina, to Turniptown Creek in North Georgia, to Stinking Creek in the high mountains of East Tennessee.

Tom's father and grandfather were both fly fishermen, but it was his grandmother who taught him the art of catching mountain trout at an early age. Tom's grandmother's family had intermarried with the Wolf Clan of the Cherokees. Cloer and his grandmother were constant companions, and he says he was her number one fishing buddy. He says she had an uncanny knack for catching trout. She taught him not only how to catch trout, but also many lessons about life in the natural world.

Tom remembers fishing Turniptown Creek in North Georgia with his dad and brother, Nat in the 1950's. On Turniptown, it was possible to catch all three varieties of trout-- brown, brook, and rainbow-- and they would haul their bountiful catch home to the supper table. Years later, the land on both sides of Turniptown Creek was purchased by President Jimmy Carter and wife Rosalynn. Carter, an avid sportsman and fly fisherman, soon discovered what a great treasure the fishery was.

As the Keowee-Toxaway project got underway in the mid-1960's, a sawmill was needed to accommodate all the timber cleared from Jocassee Valley, and Tom's family relocated to Pickens to set up the mill. Tom and his wife, Elaine, fresh out of college, found teaching jobs in the area, and he worked for his father at the mill in his spare time.

When Tom wasn't teaching in the mountain schools of Pickens County or laboring for long hours at the sawmill, he and his father were exploring the rivers and streams of the Jocassee Valley. Tom says he has fished them all-- Horsepasture, Thompson, Whitewater, Toxaway, Big and Little Eastatoe and Keowee rivers; Laurel Fork, Bearcamp, Wrights, and Mill creeks. He says the fishing then was unbelievable.

Cloer remembers the gates closing on the Jocassee dam, causing the Keowee and Whitewater rivers to flow backwards, and watching as the Jocassee Valley sank beneath the deep, crystalline waters.

Cloer fished the Horsepasture River from its junction with the Toxaway with his dad and their friends from the sawmill. They would make their camp where Bearcamp Creek joined the Horsepasture. Tom remembers catching catfish by lantern, then cooking their catch on a propane stove. The smell from frying fish would waft downriver, drawing other hungry fishermen to their camp.

Tom recalls one night in particular, having made a trip into the Horsepasture to fish, discovering that his dad's old International Scout had a flat tire, miles from the nearest road.They had a spare tire, though it wasn't much better, but no jack. Tom's father, being the industrious man he was, had the idea to cut a pole from a tree and use it for a lever. Tom stacked up some rocks, and together they lifted the Scout just enough to get the spare tire on. They held their breath as they lowered the Scout back down, hoping and praying that the tire would hold.

The Cloers and their fishing companions would sometimes go way back to an area known as Buzzard Roost, on the Toxaway River. The group of men would fish the evening for trout, red-eyed bass, and perch until it was too dark to see, then fish for catfish all night. The men would have breakfast on the river in the morning.

Tom and his dad would fish the Toxaway in a rubber raft, from their drop-off point at the old Toxaway Bridge down to what was called Devil's Hole. They would wade-fish the shallows.

Tom Cloer's roots run deep in the Jocassee Valley and surrounding area. His 4th maternal great-grandfather, Daniel Moody, settled in the Gorges in the latter part of the 1700's. He had acquired land on the Toxaway, Devil's Fork, Crow Creek, and on the Keowee River.

Tom still fishes the rivers and streams of the Jocassee Gorges as often as he can. He has watched the changes-- both good and bad-- that have taken place over the many years that he has called this place home. His stories are extraordinary, and it would take volumes just to scratch the surface of all the experiences he's had.

He has introduced his children and grandchildren to the land and waters of the Jocassee Gorges, and he is always willing to share his knowledge with others.

Not only is Dr. Tom Cloer a great fly fisherman and all-around outdoorsman, but he is also a wonderful storyteller and a fine writer. He is a recent recipient of a South Carolina Press Association award for his newspaper columns in The Pickens County Courier. I encourage you to check out his columns on local history, mountain culture, and the outdoors. Below is a link to one of his columns, a touching story about memories of fishing with his father.

There Is a River