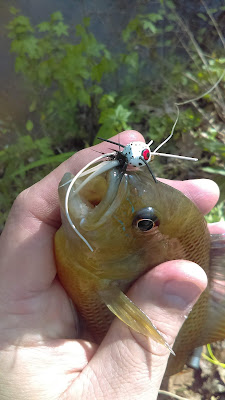 Yesterday was gorgeous, with sunshine and temperatures in the mid seventies, but there was a storm brewing in the distance. Thunder was rumbling far off in the west, and slowly headed in my direction. I would have to move quick, so I grabbed my old decrepit flyrod and a box containing a few poppers, as well as some nymphs, just for good measure. I waded through a tangle of saplings and small vines, making my way to a bank above where a branch dumps in to Wildcat Creek. Immediately, small shadows scattered, a school of bream, and they were headed for cover, which in this case was a mountain laurel bush and some submerged roots of an undercut bank.

All around me, and overhead, were limbs, vines, and leaning trees that would take my flies and probably my leader if I tried anything other than a simple roll cast. After a few tries, and a couple of snags, I figured out that I would have to let the slow current make the presentation for me. I flipped my white popper out toward the opposite bank, and started feeding line-- mending it over and again until the bug found the best path downstream to where the fish were lying in wait.

I had an good view of the water from where I was standing, and I could see a couple of fish rising, reluctant, but interested. I guess it was the slight twitch I put on the popper that triggered the first one to attack my fly with reckless abandon. The little fish mauled the popper, and I did my best based on my surroundings to set the tiny hook. The bream went wild, and in the gleam of sunlight, I could see the tell- tale color sparkling along the bottom as the small but aggressive fish tried to flee back under the bank. I knew it was a redbreast. 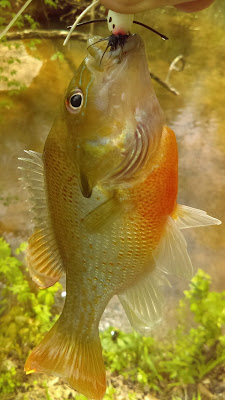 The redbreast sunfish is found throughout the eastern U.S. and into Canada. It takes it's name for the colorful marking underneath: from red to orange, like these, or shades of yellow. The males are more colorful, and their fins are as bright and colorful as their bellies. Redbreast seem to prefer deeper pools in moving water, with plenty of structure in which to hide. These fish spawn in the spring, and the male creates a nest in the shallows and the female lays her eggs, leaving the male to guard the nest and the young once they hatch. 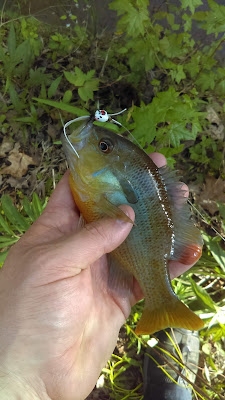 A voracious feeder, the redbreast will bite almost anything when the mood is right. In moving water, drifting live bait like worms or crickets with little or no weight is very effective, as is using small artificial lures like Rooster-tails or Mepps spinners on light spinning tackle. Redbreast are popular with fly- fishermen because they readily attack popping bugs or small wet flies. These little fish put up a big fight for their size.


In a matter of minutes, I had caught four fish from that same hole, and spotted a fish downstream feeding on bugs, about thirty yards from where I stood. It was a long shot, but I flipped the popper out and started mending the line the other way, to allow the lure to drift slowly down and around the obstructions between me and the waiting fish. I was long- lining. I could no longer see if a fish was swimming up to my bug, but when I slowed the drift with my rod tip, a fish snatched the popper with a big splash and ran with it. I stripped the fish in, hanging up a couple of times in some brush and weeds, but brought the little beauty to hand, at last. 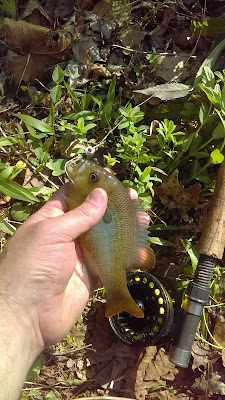 The storm was upon me. The sky had darkened, the wind was up, and lightning was streaking across the sky. I could hear the rain coming through the trees, and I knew that I was about to get soaked, so I took my rod down and headed back toward home. I'll go back when the weather clears, and work my way down the creek and see what other species are willing to bite. Hopefully more redbreast.