A gray shadow emerges from the mist of early morning. The figure moves fluidly through dense foliage and trees on the forest floor. Working it's way to the valley below, the shadow pauses to look and to listen. To be still is to be invisible, and there is no distinction between the trees and what is standing there among them. The forest is dark and deep and without sound except for water droplets falling through broad leaves. This ghost moves on, scanning the woodland, searching out its quarry. Into big timber, over the ridge and down to the valley lush with green ivy and thick brush. The shadow walks toward a clearing in the massive white oaks, but stops abruptly when there is movement in the opening in the trees. A great stag feeds on fallen acorns, it's head down, unaware. The gray figure becomes the shadow of an oak tree. The buck feeds up into plain view, it's wide set of tines raking the grasses and weeds as it grazes.

The shadow raises his bow, and draws back the string. The deer paws at the earth, trying to uncover acorns hidden in the grass. The bowman looses his arrow, and it finds its mark behind the shoulder of the stag, and it lunges forward to escape the unseen danger beyond the trees that caused the wind to crack before it. The animal falls to the earth and doesn't move again.

Nicholas removes his hood and nudges the stag on the shoulder with his bow. He lay his bow and quiver on the ground and kneels beside the beast and places his hand on the deer’s head between the antlers. He runs his hand down the thick neck and down to the shoulder to the place the arrow entered it. The blood was warm on his fingers, and he wipes them across the stag’s side. Nicholas pulls the knife from his belt and begins his work, taking from the animal all he can carry. 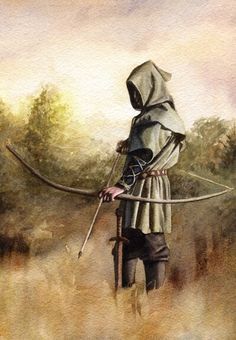