Occasionally, the Earth will give up some of her secrets. If one should be so lucky as to stumble across one of those secrets, it can have a lasting impact on how that individual sees himself, and the world around him. History is not just the past, but our past.

On my way to a hunting stand one morning, my headlamp caught a glint of white, protruding from the red clay on the bank that I was crossing. I laid my recurve bow on the ground and took great care digging the point out of the mud, then wiped it off on my shirt tail. The serrated edge was as sharp as the day it was made, long before Europeans set foot in North America.

Over the years, I have found several points, each unique, bearing the mark of the one who made it. The smaller ones being bird-points, or true arrowheads, the larger were no doubt spear points, used with an atlatl, a device used to hurl the spear at game, or enemy in time of war.

They turn up in field edges after heavy rains, or on old logging roads. Sometimes the plow would bring them to the surface of the ground where we grew our garden. Though I have found a few made of chert or perhaps flint, most of the ones around here were made of quartz like this one. In a clearing just over the hill from here, I found three lying amongst a field of chipped quartz. They looked unfinished, possibly culls, seeing as how they never made it from the place they were knapped.

I tucked the arrowhead deep in my pocket, and continued to my stand.

Once I got situated, I pulled an arrow from my quiver, an Easton aluminum tipped with a Zwicky broadhead, and laid it across the string and rest. Feeling with my fingertips, I nocked the arrow and hung it on a nail I drove into the tree. I reached into my pocket and pulled the point out and studied it. My mind started to drift back to a time long ago, trying to conjure an image of the one who might have crafted the point, and I wondered if he was the one who would use it to hunt with. I pictured the arrowhead attached to a river cane arrow, hafted with sinew from a deer's hind leg and pine pitch, fletched with the feathers of a wild turkey.I also wondered if this man was a Cherokee, or one of the lesser-known tribes that inhabited the area before Columbus.

I felt a connection sitting there in the middle of the same woods, though I am sure it was dramatically different than the woods he roamed so long ago. I wondered if he was a successful hunter, or if he was like me, sort-of a screw up. No doubt that this hunter had a family or clan to feed, and just like my family, they counted on him returning home with a great story, even if he came home empty-handed. 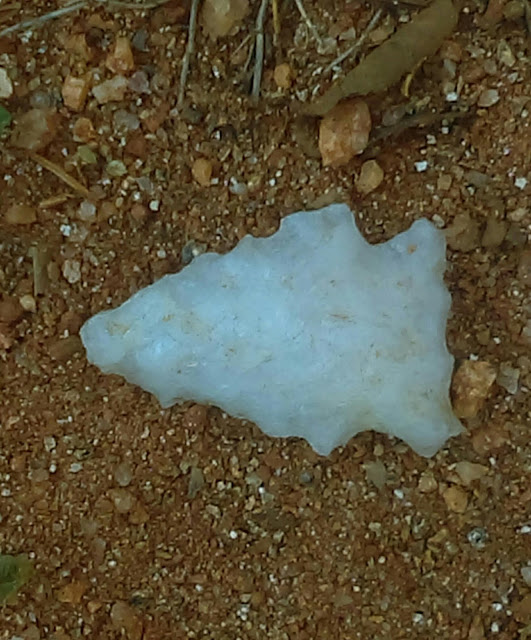